The Sound of Snowfall 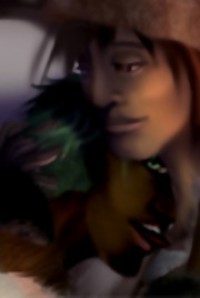 Eh. It wasn't bad. Until Sebali showed up. "Seba," hah. What other princess named Seba blathering about Adrian could there be? It's Sebastian. And then I just...ewww

So, what, is Sebastian permanently a woman now? Cuz I guess that would be fine, too, from a moralistic sense, although that means I got tricked into reading a het romance, and just...ewww
I dunno, I mean, any enjoyment I might have derived from this story got squicked out by "Sebali"

Gah. What the hell, man. I still hate this stupid-ass "pretend to be a woman" bullshit. Okay, already there's the issue of an heir/several heirs that's bothering me. Like come on, bigger picture here. And the worst part it, it's been proven that Capricious Rose is powerful enough to influence changes of law. And yet, nothing of the sort happens. Instead, they go with the stupid-ass "actually born as a woman, made him think she was a he all these years" charade.

Ugg. How is it a cameo of stupid Sebastian shows up so much and they keep talking about him/her whatever bullshit is going on with that?

Worst part is, I think I wouldn't have so much issue with Sebastian being spewed all over the page everywhere if he weren't publicly a woman. Or it'd be okay if he actually were trans* or something. Or idk everything about this farce of a charade just bothers me. Gah.

Ugg. I tried to sit through the rest of it and the epilogue, but all of the Sebastian/Sebali everywhere really put me off.

4-star for the story itself, even if Jade's like completely different than how the author wrote him in Intrigue. 1.5 for Sebali ew.
Which overall, puts it at a 2-star. Sorry, Jade. Blame Sebali for your low rating.

Here's what I typed while reading:
*squints with suspicion*
JADE, BABY, WHAT STRANGE CURSE HAVE YOU GOTTEN YOURSELF UNDER? I mean, Jade's turn of phrase was weird to me anyways (although I've generally laid that on the author), but this...this is some Shakespearean shit, man. (ETA: no curse. just weird authorness, I guess...)

I mean, in Intrigue, his speech at first was kind of regular-ish, and then as the story went along, got all...I dunno, interestingly dialect-y, somehow, if I remember correctly. And now, wow, his speech is barely comprehensible.

Also, I went through the entirety of Intrigue not knowing that Jade apparently has skin the deepest shade of ink. All I really knew about him was "green" and "soul eating," really, now that I think of it.

I mean, I'm fairly certain I read the updated version, and I still don't get it. So I guess I'll just follow the suggestion anyways to let my eyes glaze over and just nod and smile.
Tweet