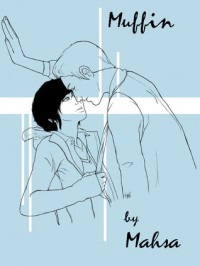 8/17/14
More musings:
I was spot-reading and thinking of Muffin and how borderline reprehensible his character is, which led me to think of Intrigue at the Crown Jewel, and how the author tried to create a character that had archetypally negative characteristics that generally would be the bane of the MC, and how I thought Sebastian ultimately had very little redeeming about him and how vaguely annoyed I ended up with him -- interesting because he wasn't completely and immediately discernible as annoying to me, per se, but there definitely was something that didn't sit right with me. Thing about Sebastian is, you're supposed to like him, and that's how he's written in a large sense. (Muffin, on the other hand...I don't know. I don't think it matters if you like him or not. He's how he is. He's not going to be a certain way to get you to like him, i.e. the author's not going to manipulate situations in such a way to force the reader to like her character. [sidebar: that sits better with me; I tend to have issues liking characters that feels like the author's writing too hard make the reader like])

Anyways, I was thinking on Muffin and how he's got all this stuff about him that's kind of stupid and un-hero-like. He's petty, for one, clearly, and somewhat inconsistent at times, really, and he really is kind of an asshole. The thing about him, though, is that even though he is borderline annoying most of the time, he really does have the metaphoric squishy center, but unlike with other more character-like characters, his seems real. You almost don't see it because he's not written in such a way that seems like he does the asshole front to hide his delicate insides; that's just the way he is. He makes stupid decisions, sure, and he's prone to fits of passion, but that just makes him all the more startlingly real, especially in the face of such a melodramatic character...well, character as Asher.

And really, that one Muffin story really is poignant. So, so poignant.

8/4/14
...Eh. I had nothing to say until a couple hundred pages in, when a certain line caused me to think how much of a yaoi this story was.

Although, of course, now that I switched to my computer where I can more easily copy+paste, I can no longer find the then-flagrant line.

But *shrug* it does seem like a yaoi in construction. Pushy presumptuous seme, poor beleaguered uke. Falling into a somewhat Stockholm-esque acceptance.

Anyways, the line happened somewhere towards the end of Chap 11 and beginning of Chap 12. Thereabouts.

So, I mean, the whole thing is non-con, definitely, I suppose dub-con-ish at times, although unlike yaois, there seems to be more plot. Seems to be, though, in that there are actually a good couple hundred pages (in my DL'ed version) before any action happens. Still, though, it's rough, takes a bit to settle into the plot devices, so it can get a little hokey at times.


Okay, so wait. Asher just pushes right into Muffin with no prep at all? Now, there could have been some prep that I missed, since the scene was so damn confusing and I was distracted trying to decide if it qualified for non-con or fell solidly under dub-con, but, I dunno, shouldn't some minimal prep be required, especially given that Muffin's a complete virgin to sex, pretty much?

Asher still doesn't make sense as a character. Hard to tell if that's due to the author or due to narrator bias.


The thing in Chap 17, WTF. Didn't Asher leave on his mysterious business trip? Is Muffin hallucinating? Is he still dreaming?

OH, HEY, LOOK AT THAT. FINGER PREPPING THIS TIME. And it's all lampshaded and stuff: "what I should have done the first time." YEAH, you should have...

Eh, I dunno, all of the sex scenes in this one just make me feel uncomfortable, and I find myself skimming through/past all of this.

It was from that point on that nothing really made sense, though. Pretty sure somehow I tripped and fell down the rabbit hole.


So wait. Wtf. Was Asher even there? Wasn't he out of the country? Or was he not yet?

So wait. What, was the entire damn thing a whole weird long extended dream?


So much weird mind-fuck going on around end of Chap 17 through at least 18, probably into 19.


What a little idiot; he didn't bother take anything with him when he ran.


The biggest problem, I think, is the story's not cohesive. It's not bad, sure, but it's not quite tight enough for it to necessarily make sense as a whole, even as an unreliable narrator situation.


Okay, so shit from about mid-17 through partway through 20 makes little sense, but the aftermath starts getting back on track, it feels like. The derailed feeling is gone, and there's some sense of purpose about the story again.

And this section is just heart-breaking.

Niggle: "diluted water." Doctored water probably makes more sense. You can't really dilute water (with what, more water?)
Honestly, the biggest thing that threw everything out of whack was that awkward sex scene, and Asher's presence after I thought he should have been gone (wtf is this actually a supernatural thing? Can he teleport? Walk through travel portals? Remote manifestation or whatever the term is? wtf is going on?)

Gah. Okay, after mid-20, it starts settling back, I think. Nothing makes sense, still, but it's the unreliable narrator feel and not the unreliable author feel.


This is like that other story, except with a pluckier (or more idiotic) MC. That one where the MC is named Michael and gets sold to this Russian guy who calls him Misha and then there's FBI involved and shit happens, but basically, I don't remember the title. Wait. Traded. That was it.

Anyways, yeah, this story reminds me so much of Traded, except this MC seems slightly less pathetic than Michael seemed most of the time.


It took a while to get here, though. The "Traded" point. Before that, it was more like...I dunno, pretty much every other mobster yaoi out there (which is a gross overgeneralization, as I seem to remember a few that were pretty sweet and fluffy, where the worst ordeal the couple had to go through was getting accepted by the present boss or something. That one had the uke in a black kimono.)

At this point, the story's not exactly bad. There's focus again, as I said, so it doesn't feel like I'm futilely chasing words on a page, willing them to string together to form something cohesive/coherent, but at the same time, it feels almost, but not quite, completely unlike what I was previously led to believe was the story.

Here's the thing, though. Muffin's matured. That much is clear. The circumstances leading up to that are tragic, sure, and clearly he's still operating out of spite, as the decision to lash out for revenge shows. The changes in Muffin's personality, though, probably account for some of the factors that are affecting the story.


The thing is, though, it made so little sense I felt the need to keep scrolling until it got to a point that made sense. Which actually wasn't that helpful, since by the time I got to the reveal, it was late enough in the night(/*cough cough* fine, early early morning) that not much made sense to me anyways.


Welp, now that there's a sort of lull in the action, my brain decided to reflect. Man, this author plays fast and furious (I think that's how the idiom goes) with psychology. Bipolar this, schizophrenia that. At the very least, it does seem to be in the glib way most laymen tend to use, so I guess that's okay.


What the fuck. What the ever fucking fuck. I get to the fucking end of this fucking thing and there's a TBC in part two. Fucking fuck I need some stronger curse words. You goddamn goat-sucking malignant tumor. Or something. I don't even know. In the past few sections, there was nonsense, and then an emotional roller coaster, and then explosions of action I could barely follow, and more nonsense, and it ends on a goddamn TBC?

I'm too tired and mentally distraught to handle this shit.


So yeah. To recap. The beginning of this story was what. Also very yaoi. That happens for most of it, and then utter nonsense happens. Then tons of random shit happens, and Muffin undergoes a severe personality change, and everything becomes all Traded. And then it stops and cheerfully tells you to continue to pt 2, which normally would be no problem, except I still have no wifi at home and was reading off a copy I DL'ed earlier.