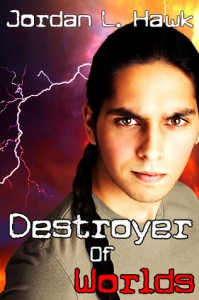 I still have no idea why John's so obsessed with SPECTR. It's not like they're his surrogate father or anything. I really see no reason except convenience for the author. Makes it sort of bullshitty, though. Also makes it really basic and boring. Character depth is lacking


I still hate the covers of this series.


Oh, hey, it turned into the menage. I mean, we could kind of tell it was heading that way anyways...

Eh. No. I don't like it. It's simplistic. It takes the base minimum and doesn't really expand much upon it, which is bullshit.


It's a great premise, but the execution is pretty disappointing. Simplistic, basic, almost negligent, really. At this point, I'd probably still read on, but I can foresee it quickly settling into idiotic complaisance. It's not quite completely boring and kitschy yet, but it's getting there.

I really don't actually hate it that much, but all the high ratings were annoying me so it ended up with a 2-star. Let's say my rating is 2.5, rounded down for its overly-inflated overall rating at the time of writing.
Tweet