This book was provided to me by the author through the M/M Romance Group DBML program in exchange for an honest review.


It took a few false starts for me to start getting into the book. For one thing, there's this introduction of the character(s), kind of, before the story even begins. I sat down in a crowded subway train car and the older lady next to me decided to prattle on and on about her precocious second cousin and all his antics and his cute little boyfriend and their antics and I pretty much just smiled and nodded, cringing inside because everyone knows you never even make eye contact with the random stranger you're stuck next to when any other time, you would have made sure there was at least one empty seat between you and anyone else.

Even as the story started unfolding, I kind of just nodded and smiled, and later started averting my eyes, hoping that the lady would take a hint and please, please, stop talking.

I found that I didn't care for any of the characters. None of them had any particularly redeeming features about them, nor anything more than possibly passingly appealing. They were also horribly underdeveloped. Actions happen and maybe a passing reference to motive, but that seemed to deeply resonate with a sense of character about any of them. There are also a ton of thinly veiled perpetuation of stereotypes: the bitchy queen gay; the "Italian temper"; geekiness, and the implications thereof, to name a few.

There were...what, 3 women in this? One of them is a full-on flat character, existing solely for the support of the main character. Another one was someone mentioned in passing. The last, of course, is the evil, diabolical Big Bad who conspires to keep LI ostensibly not-gay, but for the sake of her own profit and not, you know, love or anything. Reminded me of that one Pantene commercial, actually. The one that didn't really have much to do with shampoo, but had a pretty good message regardless.

Overall, I'd agree in saying the last 1/3 is definitely a lot better than the first 2/3 parts. It still, however, drags on. I kept glancing at the scroll bar on my pdf, wondering if I was finally nearing the end of the document and the end of Adrian's long, drawn-out denial and Ben's passive I-don't-even-know-what.
The biggest problem with the last part is that it depends on you liking/warming up to the characters through the protracted exposition. The exposition didn't do it for me, so when it came to down story stuff of stuff happening to the characters later on, I really didn't care.
I did want to care because I knew I'd have to finish it, but the most I could summon up was, "That's nice, dear."
If I hadn't had to finish it, I would have DNF'ed long, long ago, maybe sometime in part 1, or maybe I'd have managed to push into the beginning of part 2. Either way, I doubt, if I hadn't had to read on, that I would have. Technically, I got through it, but the ending got the most perfunctory of readings.

A pet peeve of mine is when books end with a sex scene, as this one does. However, a part of me was also deliriously happy I'd finally reached the end, so I'm torn about the ending scene.


Per my usual review format, below is my comment-as-I-go:

Adrian. What the fuck is up with Adrian. Is he actually the Love Interest? Because at about page 10, I could have sworn it was Jason. Ah, but that would have been too easy. I shall wait, then, to judge further.

The name "Red." Under other circumstances, that's a nickname I could have probably ignored as unfortunate, except at 13/323 the author turned it into a rather unfortunate gimmick and now it's kitschy. 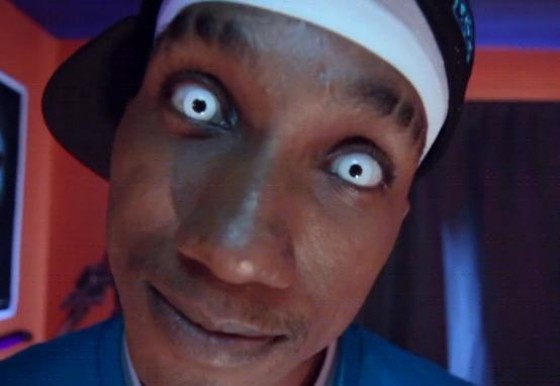 Am I a pretty girl? Am I sexy now?
I can understand attraction to light eyes, with a darker rim, cuz that just looks like Ellis-eyes (At His Throat, a Promise), but the author specifically said so pale there was little-to-no-rim (something like that). You know, the no-iris look. Those sort of eyes don't really often rate on conventional standards of beauty or sexiness. Normally, I'd just dismiss that sort of thing as personal taste, except the author claims the character read an article on a study in which people continually rated the no-iris look as top sexy-eyes. What. What exactly was the population sample, members of Sharon Needles' Haus of Haunt?
Compounding the eye problem, though she later describes le boss-man's eyes as gunmetal. To give you an idea of around what color range gunmetal is, here's a swatch:

Later, it turns out Mr. Sutherland (aka le boss man [seriously, the author refers to him as the boss so much I almost thought I was in some office-themed erotica]) has "smoky gray-blue" eyes, similar in color to white-flecked-blue carpet.

I also feel like I need to comment on the fact that at <20 pages in, we already learn about a black security guard named Tyrone. <br/>
The gym installment was...similarly gimmicky. I tried to see it as organic and coincidental or whatever, but it felt like the author had manufactured Carl's suffering for the sake of (1) bringing in a Big Bad in some shape, form, or other, and (2) creating the ideal location for gay fantasies. I mean place to exercise. And thus give Ben ample opportunity to ogle le boss-man.

"Scarfing" a drink. A drink? I've heard food, definitely, but a drink? I mean, I've found one reference to a
"eat or drink voraciously" definition, but it's a single solitary reference and the drink part seemed more thrown in than purposefully included. Either way, it's atypical diction, more suited to those not as familiar with the linguistic subtleties of connotations and idiom, or to a middle schooler who first discovered the existence of the thesaurus.

"Honker." Honker? What the fu- are you trying to say penis? Or are we talking about some other equally indecipherable body part? Seriously, what the hell is a "honker"? Mouth?

I think the main problem for me at 36 pages in is the characterization. If we see the self, or in this case, character creation as a daisy, then each characteristic we're told about is a petal. The problem here, though, is that while we're presented with several petals, they don't quite seem to connect to a disc in the center. They're just free floating petals arranged in space and hanging there precariously, giving us the outline of a flower, but not quite an actual daisy. Some petals, even, seem to have come from several different flowers, so while placed in close proximity we get the outline of a flower, we're not quite sure what kind or if the parts we are presented with are part of the same whole.
Basically, at 36 pages in, I still have no idea who any of the characters are, and it's starting to get into some really characterization-dependent stuff.

The entire thing has a subtle underdone of disingenuity to it. It's one of those stories that, putting it nicely, feels like the characters are poorly rehearsed actors in a hastily put together play. They're not quite in character and too much of their own personality is leaking through to their performance, or maybe the personality of their last role, but either way, they haven't quite gotten it down yet.

I'm curious about the question about the deer. Are there really questions like that on a [insert random combination of letters] exam? The rest of it, okay, but the full moon thing? That makes it sound like purposefully bullshitty bullshit.

I find a lot of things don't quite make sense except to further a very specific end -- Adrian, out of the closet and together with Ben. Everything that happens doesn't happen because it happens, but because events are tailored to reach this end.

Getting into part two was weird. By then, I couldn't find it in myself to care overmuch about the main characters, so I didn't care much about what was going on. In fact, I find that, at page 96, I see to be completely indifferent towards the characters.


Part 3
Yes, it does start getting better, if I try to think of these characters as unrelated to those the author was attempting to forcibly introduce in the first two parts and just run with the bits I gleaned and what goes on in part 3.

confession:took a little break from reading, read some other stuff, and now am picking up where I left off. I find I care even less for the characters now and finishing has become quite an ordeal.

I thought the depth of Adrian's -- denial? Yeah, let's call it that -- denial was a bit hard to believe. He somehow came to the assumption that Ben was definitely Jason's boyfriend and stuck with it. That was either incredibly stupidly naive on his part, believing that carnal relations = love, or completely ostrich-head-in-sand of him. "He's with Jason, therefore he's nowhere near available." It got to a point where it was just annoying.

I also don't like that Jason's being blamed for everything. Of course, I wasn't incredibly enamored of either character. That the HIV thing was touched upon was kind of cool, only because STDs/STIs aren't really something people like to talk about.

I didn't like the way Laurel was handled. She seemed too one-dimensionally stock-villain to me. I thought their justifications of some things -- i.e. the office pool=morale -- were really forced and that Laurel swallowed it was more on the author than the character.

There's an undertone of holier-than-thou, which makes it comes off as forced allegory.

201/323 Oh, deities above, if only I could abort mission. Alas, I cannot. Or, if only I cared about the characters. Alas, I do not.
Tweet