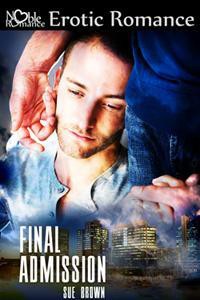 There are aspects that are weird and kitschy that kind of ruined the entire thing a bit. And also, the initiation of sex was awkward.

James. What the fuck is up with James. Is he or isn't he a womanizer? And if he is, why did he so readily admit to having a husband? Was there some excu- *cough cough * explanation mixed in somewhere that I overlooked?

It weirded me out how Ethan started casually calling him Jim, and James was okay with it. I dunno...I have this thing were I guess certain nicknames are okay, and then others aren't. Like the Jim-James thing. To me, for some reason, those are separate names. Also Jim seems like a really derpy name to me and so I guess I don't really like it. I mean, Jim Moriarty is okay cuz Scott's Moriarty is, in a way, kind of derpy anyways.

It doesn't make sense for scars to be more sensitive, does it? Not unless they're just-healing scars.

Of course he would be secretly rich. Sheesh.