The Prince and the Program (The Mordred Saga) 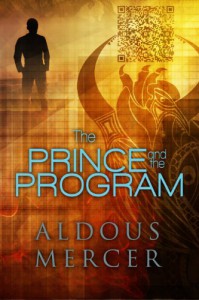 Yeah, all of the mathy-sciency stuff is going waaay over my head. Kind of cool to sit and bask, though. In the scientific aura of sciency stuff.

And then it just got weird for a while.

It's odd. It's like logic I can almost - but not quite - grasp, and perhaps I could grasp if I wished to expend a bit more energy on attempting grasping, yet is still, at the present energy and effort output, quite out of reach. It's like Carrollian logic that way. Of course, it's apparently also computer science/cryptography, so it probably is quite understandable, to those who know the jargon. Or enough of the jargon. I know enough to just barely grasp onto the barest corner of meaning with minimal extra effort output. I probably don't understand enough to grasp significantly more meaning even if I tried, though.

The last bit gets quite bleak. Even more so because of how inscrutable it was.

I feel like I'd need to reread this several times, in small chunks, perhaps, to distill any sort of deep meaning from it.

As for the plot...Something happened. Not entirely sure what, but I do know for certain something happened. And Love did not Prevail, as far as I can tell. It perhaps Transcended, but we all know that's a shitty way to resolve Love, not unless it's a ballet and it's apparently the best you can hope for.

The worst part is that it was so difficult to tease out vital details of the universe. Who exactly know what about whom and when? Those are rather important, you know. Otherwise, none of us have absolutely any idea what to expect.

And aha. It IS the first of a series. Proposed series. Whatever.

Basically, the book is actually less comprehensible than the least comprehensible of my reviews, which can be pretty damn incomprehensible, even to me. I blame it on trying to come up with thoughts after finishing the book at 2am, forgetting about it until 3am after i'd started some other book, had been getting <6hrs sleep for the past couple of days, and for some reason, it's now 4am and I'm still awake.
Tweet