The beginning was very confusingly written. A lot seemed to have been omitted and there was information the author took for granted, and thus didn't impart to the readers. The author took the opposite route of info-dumping: not providing the information at all. It wasn't written in such a way that we could pick up on it, read the subtle clues and therefore not feel so poleaxed when certain pieces of indispensible information was revealed.

The main problem is that the author fashioned xyr universe, and yet didn't bother tell us much about it. Xe is operating under certain assumptions xe is able to make because xe knows the universe, while the reader, unfamiliar as xe is with the author's universe, is left to flounder.

Ah, no I get it. It makes sense if you read the blurb.
The blurb is the missing prologue.

That's horrible. Your book shouldn't ever be carried by your blurb. Which came first, the blurb or the book? That's like asking if the sparknotes for The Odyssey came before Homer wrote it =_=

There were gimmicks. Gimmicks are annoying.
A lot is not revealed when it should be.
Who did the wolves hunting Kaden kill (nvmd; that was revealed later. turns out it was that subplot/plot bunny that intruded amidst who knows wtf is going on)? How exactly did they find him again? WTF went down with this kidnapping business? What was the reasoning behind that weird line about Kaden's body not being fit for viewing? Why are there deus ex machinas mixed in with gimmicks? Is there some kind of pejorative associated with being a mage?

A mishmash of cliches and subgenre tropes cemented together by...I don't know. Probably just held together by a couple of threads.

The lack of information makes everything seem like farce. Weird shit is happening for apparently no reason, making it sometimes come off as comical.

You know, Michael comes off sounding like a lesser of the two evils situation. Sure, he "loves" Kaden, of the "I will never let you go. Ever. For any reason. Any at all." 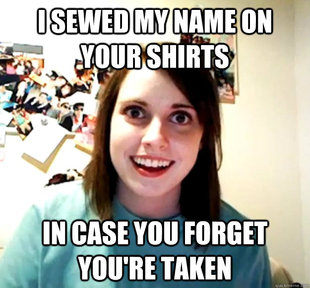 His family goes along with him to coerce/extort Kaden into staying until Stockholm can set in. I mean, until he realizes he loves Michael and forgives him for perceived wrongs that really weren't Michael's fault (even though for some reason, the rest of his family blamed him for leaving Kaden in danger. Uh...how could they have known the situation? Unless their reasoning is "now that you've found your mate, clearly the only safe place for said mate to be is with you; therefore, you shouldn't have left your mate in danger, i.e. bereft of your presence." Either way, it's a bunch of clusterfuuuuuck.)

Some reason, I feel like all I really got out of this story was, "Damn. I really wish I had some bacon right now."
Oh, and "Holy shit, they're all creepy bastards."
And "Someone please help Kaden ___." (Look. A Hannibal fandom reference. See what this book's doing to me?)

For some reason, I felt like one of the morals of this story was "women are property."
Something about the proprietary way Michael sometimes referred to his mother...

The sister...Ah, the sister.
First off, her name's Missy, which is a bitch name if I've ever heard one. Secondly, she comes off as so damn vapid in her introduction. Blathering about "OMG! Did you know black holes had four dimensions? I looked it up on NASA. A friend told me her teacher told her they had two, but NASA says they have four. And ahmigawd and no way and OMG and did you know?"

And another thing. Jade is a pretty atypical guy name. How did he think that would help make him incognito? Because who needs common sense, right?

And the the sister blathers on some more. And then talks about doing complex caluclations. "Like, omg. I'm not an airhead. I like totally do math and can calculate complex things. I love to read, too. I'm getting an encyclopedia and it's going to be totally cute. And-"
I can't force myself to mimic this...this anymore.

She must be that chick from Legally Blond.

The signs of an impending first shift...you can tell us what they are, you know.


There's nothing endearing about this story at all. I feel nothing for this but a sort of mild-to-moderate disgust.
Tweet